Rapid Air technology is the name Philips gave to the RUSH technology that was developed by APDS Development during the development of the Airfryer. RUSH stands for Radiant and UpStream Heating, which tells us something about the way heat is transferred. Distinctive about the technology is that heat is transferred with very high intensity, that heat is distributed over the food from all sides and that the heat can penetrate through a thick pile of food particles. 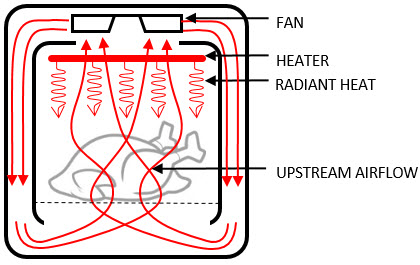 Figure 1 shows a schematic overview of the ‘RUSH principle’. Radiant heat is coming from a heating element just above the food and convection heat is coming from a strong upwards moving air stream that flows through the open bottom of the food chamber. So heat comes from both sides and is totally focused on the food. All air is forced to pass over the food and heater surface by every circulation cycle, there is no idle air circulating around (like in a convection oven). The total air volume to be heated is limited and circulates inside the space where the heat is required. A special star shaped air guide profile on the bottom of the preparation room creates a optimized airflow pattern to distribute the air, loaded with heat energy, evenly over the bottom side of the food.

This technology was created to mimic the effect of a deep fryer with air as a heat carrier instead of oil. Because oil can hold and transport much more heat per dm3 than air, it takes much more air movement to transfer the same amount of heat. The rapid airflow inside an Airfryer transports the heat to all parts and sides of the food with high intensity. It can penetrate through a thick pile of food. The radiation from the heater, which is partly in the far infra red range, penetrates deep under the food surface. This combination caused a very high heat transfer rate and can create a cooking result that is comparable with deep frying.

When compared to a convection oven…

Cooking results depend greatly on the way and speed heat is distributed. Although Rapid Air technology is suitable for all kinds of food, the effects on french fries are used to illustrate the differences with a convection oven. One effect is that because the heat intensity is much higher, the maillard reaction and crust forming sets in earlier and the preparation times are shorter. The crust functions as a protective layer that preserves the original nutritional values and moisture levels inside the food.

Another effect is fat reduction. Basically all types and size of fries can be prepared in an Airfryer. Prebaked fries allready have a layer of fat, they don’t need addition oil to finish. Home made fries require a pre-treatment to distribute a bit of oil over the food surface. During the airfrying process the drips off the surface and is collected in the pan underneath the basket and can no longer touch the food.  The end level of fat can be 80% lower than the starting level.

Cooking with an Airfryer

Cooking with an Airfryer is very much like deep frying. You just put the food in a food basket and fry.  But the basket is a bit different. Only the bottom is open, all sidewalls are closed.  This guarantees that all air will pass over the food surface. Just like deep frying you can take out the basket during the cooking cycle to rearrange the ingredients, to avoid that they stick together and to expose other food surfaces to the heat. Off course shaking is only necessary when the food is piled up. When cooking other types of food, like snacks, chicken, fish or to bake off bread for instance, the cooking process does not require any user action.